Under the Protocol Brexit settlement, NI has a dual position within the EU and UK VAT regime, Customs Union and Single Markets for goods only. Most controversially, the Bill gives the UK government powers to change the rules on:

The Bill is already being viewed by the EU and many commentators as breaching the UK’s international legal obligations under the Protocol.  (I will leave this to others more qualified than me, a lowly VAT fellow, to comment on). However, given the challenges and long road to ratification, the reality is that it may well just be an insurance tactic to reassure the Unionist DUP and encourage them back into the NI power sharing arrangement.

The Bill has no legislative timetable, and is likely to meet resistance in the House of Lords, upper Parliamentary chamber.

VAT changes in the Bill

For VAT, this new Bill essentially ensures any UK rate changes by the UK Treasury are equally applied in Northern Ireland. The Protocol currently requires Northern Ireland to follow EU VAT rules on goods.  This creates distortion when, for example, the UK cut VAT on domestic energy saving goods to zero. This was not at the time permitted under the EU VAT Directive. However, the increased EU VAT rate setting freedoms agreed in April 2022 changed this.

The Northern Ireland Protocol (see below) accompanied the January 2020 Withdrawal Agreement which, in turn, sealed the UK-EU trade exit terms. This mean that the UK left the EU VAT regime, Customs Union and Single Market on 1 January 2021.

Customs changes under the Bill.

On customs, the Bill essentially removes the operative articles of the Protocol relating to customs checks/controls. The UK views the current Protocol as imposing too many checks and requirements on goods going from the rest of the UK to NI and not being for onward dispatch to the EU via the Republic of Ireland.

The Bill doesn’t set out what will replace them, but we know the UK envisions a red/green channel approach.

The Bill would allow the government to introduce separate “green” and “red” lanes for goods travelling between GB and NI Goods staying in NI would travel through the “green” lane and be freed of “unnecessary” paperwork. Goods destined for the EU via the Republic of Ireland would travel through the “red” lane and would be subject to full checks and controls and full customs procedures. These dual lanes would be backed by trusted trader schemes (only certified traders could use the green lane) and commercial data. Post and parcels would go through the green lane. Furthermore, there would be robust exchange of data sharing and a purpose-built IT system. 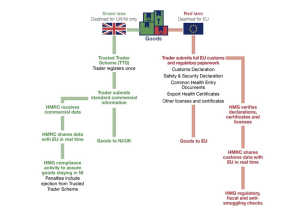 The UK says this would protect the EU single market, as Brussels has demanded.

Goods regulations under the Bill

Articles relating to regulation of goods in the original Protocol are replaced by a dual regulatory model. At the moment, goods in NI need to comply with EU rules even if they will never enter the single market. Under the legislation, businesses would have the choice of placing goods on the market in NI according to either UK (UKCA) or EU (CE) rules. The UK says this is to ensure that NI consumers are not prevented from buying UK standard goods, as can happen now.

The downside is that this system introduces uncertainty – the opposite of what businesses want. It also shifts the burden of compliance to firms, making them liable for ensuring the goods placed on the NI market meet correct standards and penalising them if they don’t. There’s no evidence the dual regulatory regime is necessary, or that NI businesses actually want it.

Ending the role of the European Court of Justice

The Bill gives the option to switch off ECJ jurisdiction over the Protocol re national courts, unless secondary legislation provides otherwise. The Bill would change this so disputes are resolved by independent arbitration instead.

Following the end of the Brexit transition period on 31 December 2020, NI has taken up a dual position in the EU Customs Union, Single Market and VAT regime as well as in the UK’s equivalents for goods only. However, the reality is that NI is in the EU sphere, and clashes are appearing where goods cross into GB. The rules of engagement for this were contained within the Northern Ireland Protocol, which accompanied the January 2020 Withdrawal Agreement which, in turn, sealed the UK-EU exit terms.

The aim was to avoid the needs for border controls between NI and the island of Ireland (IE) instead, moving any checks onto the goods moving between GB and NI with an eventual EU destination to the GB/NI border.. So, while the term ‘border in the Irish Sea’ has become popular, it is actually a border at the NI ports.

In addition to avoiding the need for an IE-NI border, the NI Protocol enabled the UK to diverge from the EU regulatory regime. This is something which had not been envisaged in the Theresa May ‘backstop’ proposal whereby the UK would remain in the Customs Union for a period.

How should the protocol work?

The regulatory and tax operation of the Protocol for goods is as follows:

NI being inside the EU customs union and UK union means businesses can get free access to both markets. Practically though, it is in the EU customs region. And this means that where the two touch, particularly GB to NI movements, it is already causing friction (see below).

Oversight of the implementation and changes to the above are carried out by a series of joint bodies, with an overarching Joint Committee, to consult on issues, and work to resolve differences. Services are outside of this regime, and come under the governance of the TCA, with normal third-country VAT and customs rules.